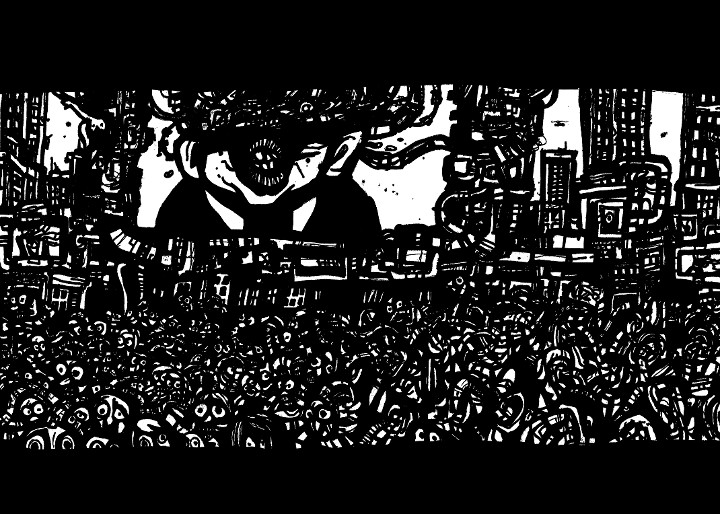 Pen and Ink Artwork from te Monstrous Metropolis! Terrifying technological tentacles are assimilating mankind! Using all means of mass manipulation an evil business demigod is trying to control the City of Gears. With strange subliminal distractions and hypnotic messages the villain pushes and pulls people around like lab rats forcing ideals and ideologies into daily routines. The attack is relentless and coming from all directions as the beast infects every aspect of our lives.

Socialization is controlled by purchases, propaganda has become entertainment and the news is merely a diversion preventing any chance at uncovering the truth. The invasion moves like a virus. Carried by electronic hosts it corrupts the metropolis via computers, movies theatre, hand held devices and televisions. All the time the ominous business demigod watches over the proceedings from his throne perched inside a giant billboard. With Medusa like tentacles seeping out over the city the monster sends shock waves and flickering images into our unconscious and unsuspecting minds...

“The City of Gears” is a mythological metropolis that I created as the backdrop for all my comics and artworks. In this imaginary landscape the buildings are shaped to form a giant gear while the crowds of people spiral endlessly through it making the city go around. In this series I was particularly interested in examining the influence of mass media on commercial culture. At the time I was drawing these images hand held devices were just beginning to become popular. While we already had cell phones and portable music players the technology suddenly became far more effective and affordable so there was a monstrous increase in usage in a vary short period of time. I envisioned the electronics as an alien invasion and created a number of heroes and villains in order to explore the ideas in my drawings.

Although the enemies in my pen and ink artworks tend to be technological I actually don't have anything against computers and devices at all. In my stories the problem isn't actually the machines but the way they are used. The difficulty with the advancement of electronic communication and information is that it has also led to an extremely sophisticated means of monitoring and controlling popular culture.

One example of this can be seen in how interconnected all of our data is. In the past we would certainly be influenced by television, billboards and magazine advertisements and of course they would be specifically aimed at particular audiences depending on the topics of the programs and articles. However these media couldn't instantly contact each other or you directly in order to maximize the effect of their ads. The internet on the other hand is intrinsically connected and inescapably aggressive when it comes to collecting and manipulating information about our lives.

One instance that caused me alarm involved my character profile on the XBOX gaming platform. The program let you make an avatar that looks just like you. After I programmed my familiar to have a shaved head I started getting bombarded with advertising for hair loss products and services. The ads appeared in my email, on the sidebar of Google and in two social network platforms and similar videos were suggested by YouTube. This all occurred within minutes of completing my game profile and continued until I deleted the profile and inputted enough unrelated data to encourage the engines to target my other interests...