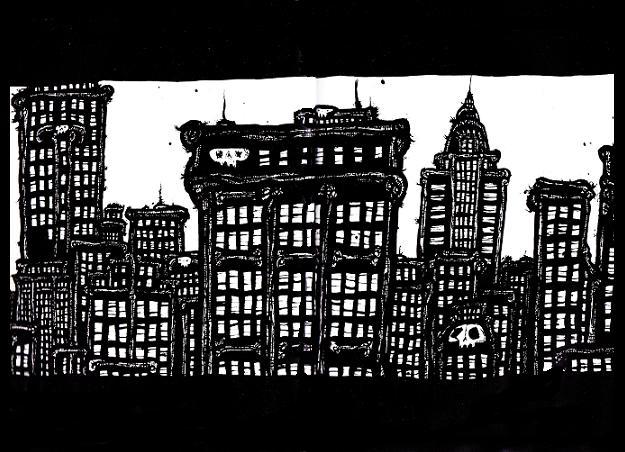 Tower tombstone buildings built of bricks and bone stretch up into the sky blocking out the sun. With strange decorative faces and concrete designs the architecture breathes history giving off an ominous air. Like the streets below packed shoppers, business people, vendors and travellers, the buildings also exhume a an energetic aura. All the lives, stories, events, successes and failures that have moved through the apartments over the course of 200 tears have all left a hint of their existence culminating in an entity unlike any other. While not the oldest city, nor the richest in culture, somehow the ultimate metropolitan unconscious has settled here. Perhaps it is the modernity, uncorrupted by ancient myth, or perhaps it is something that existed in the earth. The New York skyline booms with excitement, terror and an appetite for the extreme overflowing with a power that can only be described as magic.

As an artist interested in urban psychology and mythology it is only natural that I spent a lot of time in New York City. Luckily the commute from Toronto is both short and affordable permitting easy access and annual excursions. The city is incredibly inspiring and has a very unique character. I have visited some other major urban centres but none of them can really compare. Despite all it's excessive competitive commercial corruption New York remains an unbelievably human and friendly place. I am always amazed by the strange characters and the social atmosphere where you never know what is going to happen or who you are going to meet.

It was on my first trip that I invented the imagery featured in this series. The drawings depict many of the famous skyscraper landmarks rendered in heavy black ink with skeleton structures made of bones. The imagery, although dark and Gothic, was intended to be both a celebration and a warning. The bones are a reminder of the history and all the people while the deep black brickwork present the insidious side resembling both blood and tar. I wanted to capture the magnificence of the human energy while discussing the problematic nature of consumption and waste.