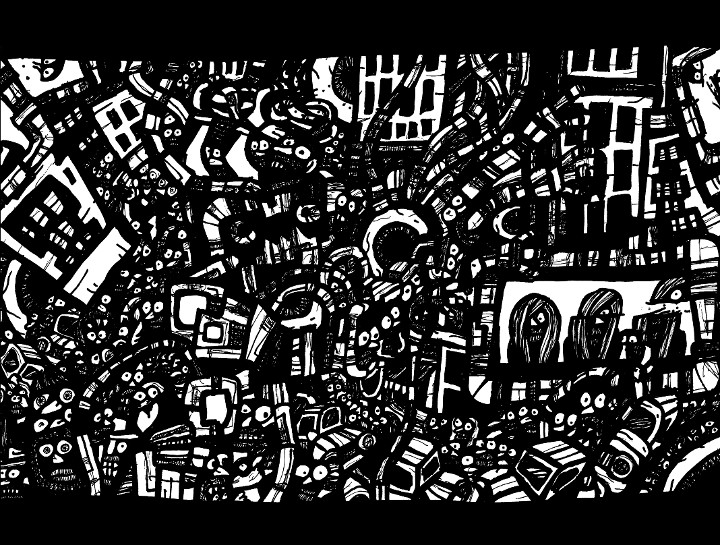 Ink Drawings from the Robot City. At first glance the city looks like a giant gear propelled by an anonymous conglomeration of wires, figures, bricks and machines. However upon closer examination we can see all these little components as separate entities. Amidst the tangle routines of the monstrous metropolis hies thousands of crazy people, each with his or her own personality and face. It is easy to get lost with all the strange technologies and towers as our routines tend to distract us from the world outside of our own minds. The buildings of the big city to in fact take the shape of an ominous gear, yet it is all the unique individuals who breath life into the machine.

Despite all the technological tentacles, hypnotic billboards, monsters and traffic jams the heart of the city is still flesh and blood. Despite the overwhelming presence of alienating electronic activity, nothing in the metropolis would function without us. No factory could pollute the lands, no market research could be conducted, and no villainous philosophies would play out on the screens. Likewise there would be no children playing games, no paintings and no music. The important part is to be aware of the city and to see it for what it really is, watch each tiny life as a contributor and try no to get lost in the turmoil of the concrete dream.

“The City of Gears” is a series of ink drawings inspired by my experiences working as a street performer in downtown Toronto. When I first started painting I worked in the isolation of an artist's studio but really wanted to get involved in street art so I could learn more about the city first hand. As I spent more and more time working in public I got really interested in the idea of comparing the “big city” as an entity with the individual people who inhabit it. This led to several illustrations like the one above where I attempted to mix the two concepts together so the viewer can read the image as a either a single cityscape or a collection of tiny characters. Ultimately I wanted to exemplify the relationship between individual actions and the overall effect we have as part of a metropolis, basically it is idea that the neither the entity nor the individual can exist separate from each other.