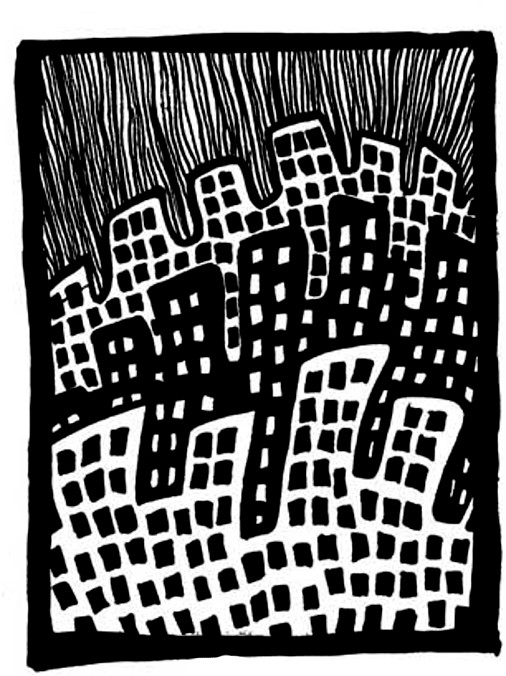 Ink City Drawings and Weird Tales! In the late evening at the end of a long work week something shifts changing the mood in the big city. The tombstone towers, emptied of people, seem to come to life on their own. Freed from the electricity and regular routines the concrete can finally hear itself think. Like the child's toy that sneaks about the house while everyone else is asleep the building also have a secret existence. With peaks waving like enormous hands the towers begin to dance swaying back and forth. The stores all close down and the hum of street lamps amps up. The restaurants and nightclubs all rumble and fade until the last train leaves town. It is at this quite time, when few citizens remain, that the skyscrapers party in the deepest darkest moments of the night.

This particular image was inspired by my late night strolls around the city. Although I lived in an east end suburb at the time of this series, it was regular practice for my friends and I to frequent all night discos on the weekend. I would often be purposefully late to meet up with them at the clubs so I could take the opportunity to stroll around the city at night. By this late hour the streets were generally quite quiet, at least in comparison to the bustling days, and I would spend a lot of time enjoying the architecture. There is something stunning about the massive structures that we usually take for granted. Not only do the technical aspects, construction and designs, amaze me but also the weird surreal power the structures seem to have. It's difficult to explain but I think about how many people and activities must go on inside these enormous buildings and how they all seem to have some sort of individual personality.

Most of the ink city drawings in this series depict both crowds and buildings as the works are meant to examine the psychological state of contemporary civilization yet I felt it inspired to try a few images that focused entirely on the towers. Interestingly enough many of these illustrations seemed to be more playful and full of energy whereas the crowd scenes were primarily reminiscent of enormous graveyards. I feel some how that this is symbolic of our responsibility towards the existence as it exemplifies the notion that is is the crowds of people not the entity known as “the big city” that creates the despair.