HERO COMICS: THE ORIGIN OF A SUPERHUMAN 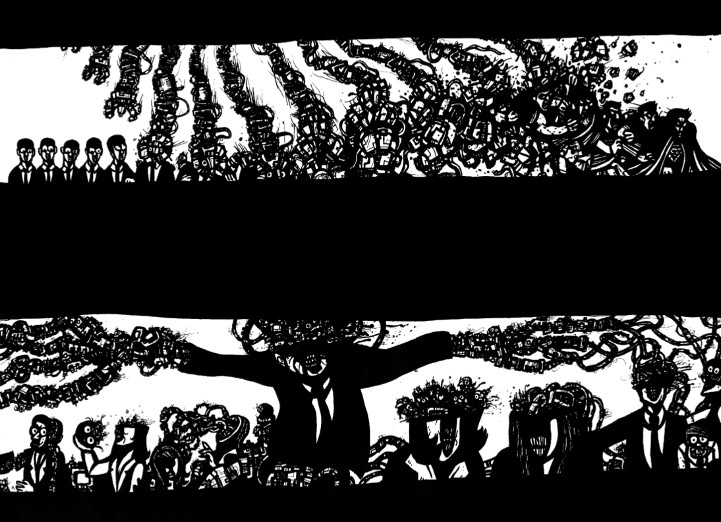 HERO COMICS! The City is under siege by an electronic extraterrestrial attack. Using immense powers of mass manipulation this unknown enemy has released a bombardment of technological tentacles upon the seemingly defenceless denizens. Reminiscent of some surreal factory production line these mysterious mechanics swoop down on their targets from all angles tampering with the human mind and added all sorts of strange computerized components. Reaching from above the tendrils can be seen removing the tops of peoples heads, the mind and eyes, and placing metallic devices inside in stead. Other violations include the insertion of wires in place of hairs, video screens in the palm of the hand and even entire appendages are being exchanged for robotics.

The serpentine mechanics can be traced back to an ominous business demigod in the center of the city square. His head has undergone a complete metamorphosis and stands tall with his arms outstretched endlessly spewing the technological tentacles from his face and fingers. While this terrifying villain gives us some clues as to the source and philosophy of behind the invasion it remains questionable as to whether or not this underling is just another victim.

Although all hope seems to be forgotten, an unusual occurrence leads to a turn of events. As one of the weird wires makes it's attack on a young nondescript businessman something out of the ordinary, in fact something extraordinary happens. The tentacle latches on to it's target with apparently unstoppable force but instead of a smooth assimilation the machine starts to shake. A struggle ensues as the young businessman puts up a violent resistance spilling black oils like blood from the machine. With a new found explosive power he smashes himself free from the beast and is instantly transformed into an amazing superhero! Wearing a black mask and eyeballs on his cape the hero flies to battle against the end of the world! 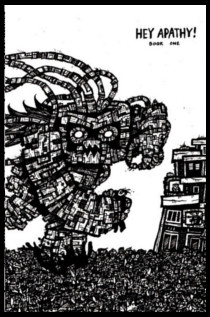 READ THE SUPERHERO COMIC! The full origin tale and the epic battle against three  giant Robots!