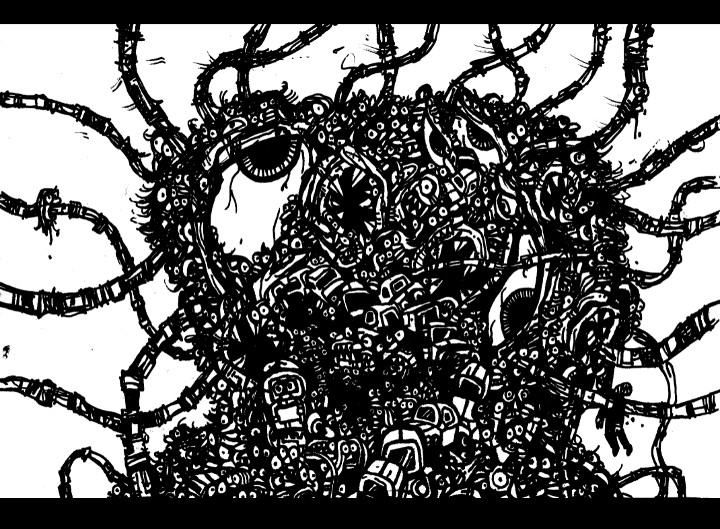 DRAW MONSTER CITY! As the energy of the metropolis collides and combines, all the tiny little components mix together formulating a new beast. All the people, devices, cars, wires and brick smash into each other to become a unified entity. This weird globular amalgamation is born of our routines as it discovers the metaphysical connections between each and every denizen spiralling through the big city. Using the electric cables and pipelines like a vascular system the City Monster draw it's life from organisms and inanimate objects alike. Driven by a strange philosophy this entity devours the individual assimilating mankind into a solitary monstrous glob. With technological tentacles the creature continues to grasp new components, feeding on anything it can get it's tendrils on. Growing immensely and at a rapid pace it would appear there is no escape from it's clutches so we'd all better run for the hills!

“The City Monster” is one of my favourite characters in this series. It is especially fun to draw monster cities because the image is made up of so many tiny people and things piled on top of each other. This composition allows me to pretty much draw anything I want within the larger monster shape. This weird monster was also perfect for live painting performances for the same reason. People could watch all sorts of tiny characters come to life right in front of there eyes and over the course of a day the entire beast would appear. This also gave me the opportunity to interact with the audience talking and taking suggestions or even adding some of them into the pile. I made four variations of the monster in small detailed ink drawings and did three mural versions including one as large as 10 ft x 12 ft.

One story that always comes to mind when I look at these images involves one of the live paintings I did on the streets of Queen St. West. The area were I performed is one of the busiest places in Toronto and was always filled with crowds of shoppers on the weekends. One Saturday I set up my display with a 6ft x 8ft piece of blank paper and was really excited as the streets were especially packed. I remember turning on my music and kneeling down to fill up a cup with ink and when I looked up I was completely surrounded. There was literally over a hundred people circled around me waiting in anticipation for the performance to begin.

I remember I wanted to draw a Superhero battle scene but something happened that changed all my plans. As I jumped up to begin I accidentally tossed the cup of ink across the paper causing a huge black splatter to fill the center of the page. Without a second thought I dove into the big mess and used the split ink to create a giant city monster. As quickly as possible the creature came to life and in this instance he was vomiting up violent black liquids as he march through the streets. I talked to a few people afterwards but almost nobody realized I had made such a blunder. There was only one guy who knew what really happened and he was even more impressed for having noticing how I draw monster.