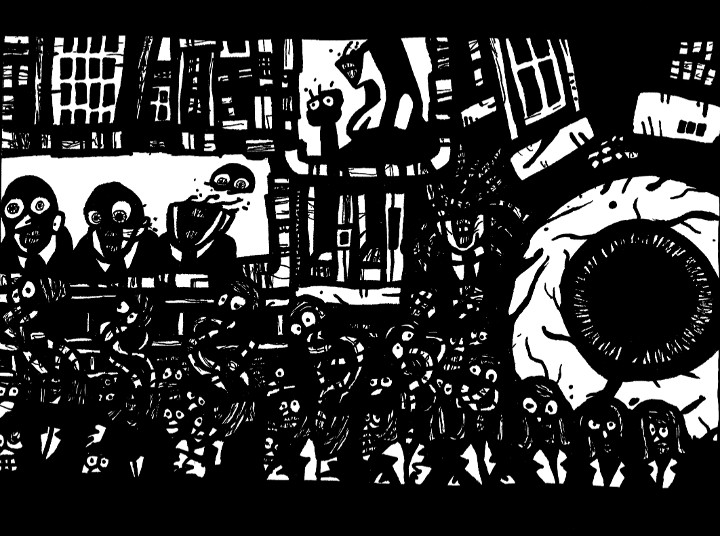 Dark Drawing! The city is functions like a giant gear, the buildings form the shape of the cog wheel while the people moving through are the energy that fuels the machine. Every crazy happenings, the traffic jams, business meetings, purchases, events and chance encounters all play a part in making the metropolis spin. In the center of the chaotic routines hides a giant eye, the centrifugal force which holds everything together. It is made up of our collective human faculties, our thoughts, hopes, dreams, and desires and is the underlying force which prevents the city from falling. Despite all our faults, all of out destructive tendencies, selfishness and the existence of pure evil, this enormous metaphysical ocular holds the key to maintaining some sort of balance. It is that little bit of remaining humanity that holds it all together.

Of course there are many enemies who aim to annihilate this energy once and for all. The fact is that the eyeball is rather miniscule when compared to it's opposing forces. The eye is surrounded by a twisted world controlled by manipulative philosophies. Giant billboards flash images of people replacing their minds with machines and these apparently attractive activities are reflected in the streets. Devious messages are transmitted through the airwaves to the wires and continually attach themselves to unsuspecting consumers.

In the background a Medusa like demigod watches over the city and in particular the eye. Spewing technological tentacles out of his face and fingers he controls the citizens activities towards some sinister end. It teaches them greed and to value inanimate and superficial objects over people while plotting to destroy the vary air that we breath. All the time the villain waits for the eyeball of the unconscious to weaken, ready to attack and take control. Yet no matter how advanced the manipulations become, and even when there appears to be no compassion left at all, the eye stays strong to the frustrations it's foes.

“The City of Gears” is a series of pen and ink dark drawings I made while working as a full time graffiti street art performer. At that time I sat on the sidewalks of downtown Toronto drawing pictures, talking to people and observing the city. The images were inspired by my experiences on the streets, particularly the interesting contrast between the big hustling city and the individual characters I actually interacted with. It always amazed me how the city appeared so cold and corrupted until I engaged with people on a personal level. As a result I ended up meeting thousands of people from all over the world and of all walks of life and discovered a positive force amidst all the commercial corruption. 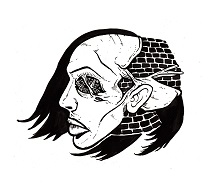