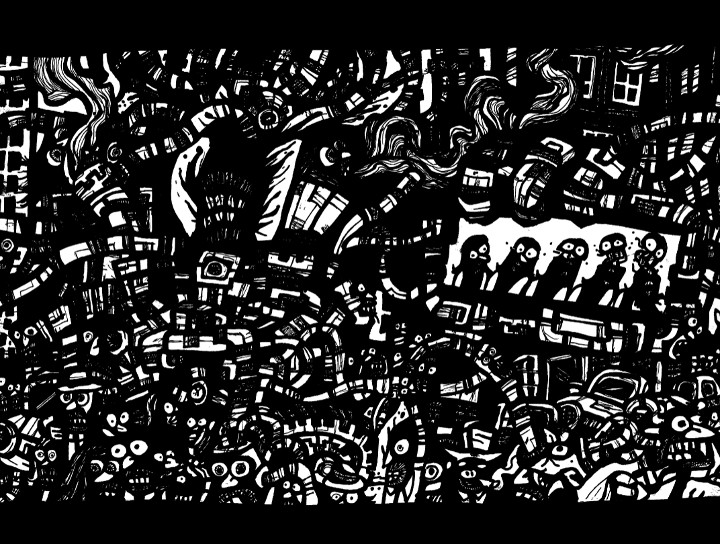 In the dark city the battle to control the humanmind rages as the evil business demigod continually develops new methods for assimilation.The invasion of the technological tentacles has taken many forms, creeping into our homes, into our bodies and advertised on giant video screens attached to the buildings. The villain to is a master of transformation consisting primarily of a devious philosophy as opposed to a physical force. Trained in the art of mass manipulation the demigod can move through images, sounds, electronics and airwaves not unlike the transit frequented by ghosts.

In this instance we can see the monster moving through the bricks, pipes and wires of a big city building. As the face of the architecture become the face of the warlord the street below suffer a subliminal assault. The windows turn to eyes and the bricks become demonic teeth while he transforms the metal tubes to create a giant hand. With this constructed appendage the beast takes hold of a billboard and the electric wires under his influence inject the dark ideas.

On the screen a beautiful young model appears smiling and boasting ideals. As she twirls her hair and tilts her head seductively the mechanical metamorphosis begins. The top of her face, her consciousness if you will, begins to separate from the rest of her body. From the insides of her head menacing mechanical tendrils spring forth and reveal themselves as the latest new trend. Still smiling and somehow still alluring despite the metallic mutation the model continues to dance across the screen. In the streets below the people barely seem to notice yet not a single one of them has truly escaped the hypnotic attack.

“The City of Gears” is a series of detailed pen and ink drawings using superhero comics and science fiction memes as a symbolic representation of the real world. The drawings were meant to question and compare commercial ideologies and the influence of media and electronics with simple human interactions. I made these artworks will working as a full time graffiti street art performer in the city of Toronto and was inspired by all the crazy activities that I witnesses while sitting in the middle of the downtown core.