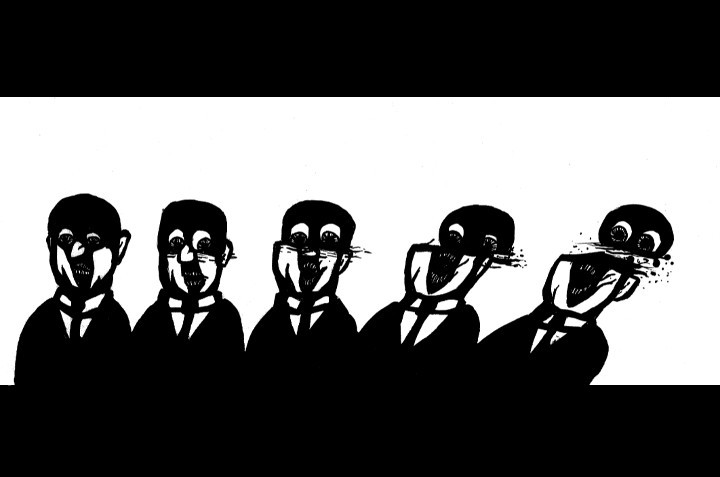 ON HAVING NO HEAD

Absurd Art On Having No Head... From the insides of ones imagination a violent blast erupts initiating a surreal decapitation. There is no external force a play here only the powers of insight separating the eyes and mind from the body in order to see the world in a different way. Looking down at himself the enlightened victim notices the absurdity of his routine uniform and a mouth spouting empty words. This is the epiphany, the big idea.

“The Big Idea” is one of my most striking and popular images. In the drawing I wanted to depict an extreme moment of realization. Inspired by the aesthetics of Samurai manga and body horror cinema I wanted to create a surrealist representation of a modern day satori. The image is made up of two major symbols. I used the businessman's suit a symbol of our daily routines, commercial ideologies and societal conformity while the exploding head is a representation of our internal thoughts in an instance of overwhelming awareness.

I first started using this drawing while working as a graffiti street art performer in downtown Toronto. At that time I would set up big sheets of paper on the sidewalks and do really fast ink drawings of crazy characters, city monsters and robot billboards. The exploding head image was always a favourite for both myself and the audience. The image incited countless reactions and interactions with all sorts of different people. I have made up a few slight variation on the title and theme depending on the person I am talking to. Sometimes I called the work “On Having No Head” in reference to a short story about a man reaching enlightenment in the wilderness and I would say it might be a more violent experience but I like to think we could achieve that state here in the city. When kids came around laughing and pointing at the image I'd always tell them it was “The Big Idea”.

I remember one incident when a giant (easily over 6.5 ft.) business man stopped in front of the art work. I was looking down at the drawings but instantly felt the intimidating presence looming over me and my work. Blocking out the sun with his massive figure he pointed at the drawing and asked in an aggressive baritone voice “What does that mean.” I knew right away that he was reading the absurd art as some sort of violent protest against business men and had it in his mind the work should be removed from the public streets. I went on to explain the epiphany and the suit as a symbolic device and it was amazing how quickly his posture changed. After hearing the explanation the man became quite friendly and responsive telling me that he could totally relate to the idea now that he understood. He took a business card and thanked a left the scene with a smile on his face.