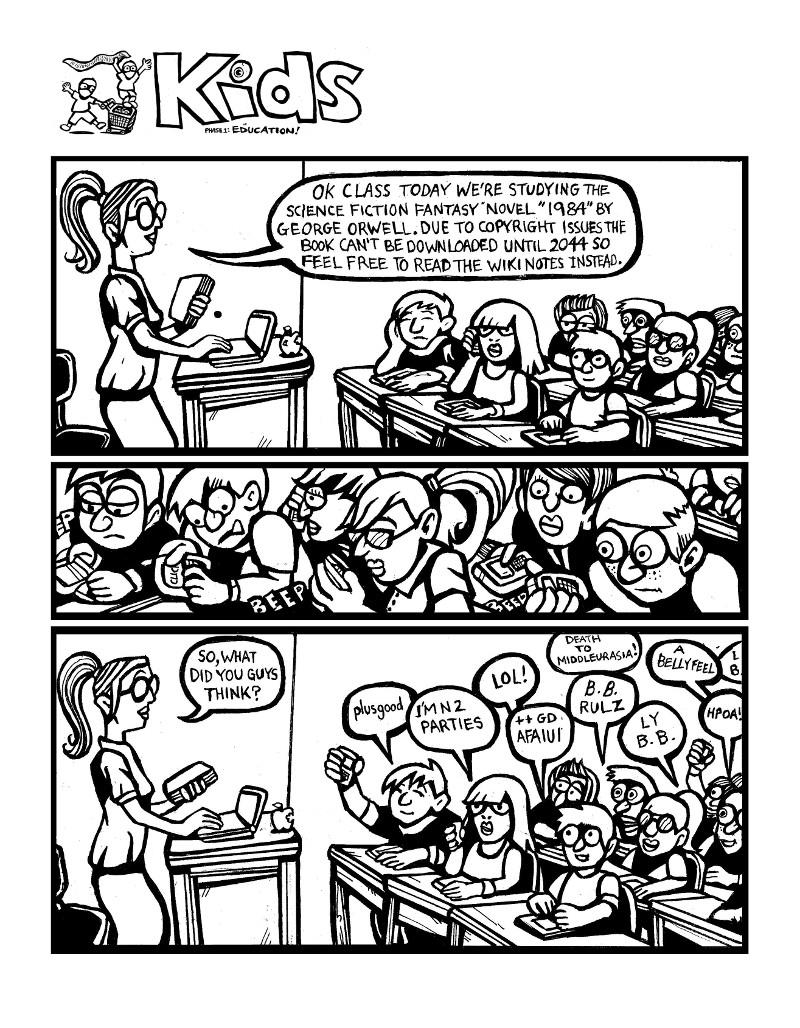 ORWELLIAN STORIES In George Orwell's novel 1984 he discusses a government sanctioned perversion of language called “newspeak”. In the book it involves the reduction of the English vocabulary as means to control human emotion and activities. For example negative words are removed in order to prevent negative attitudes. In addition to limiting the vocabulary books have also been outlawed and information is subject to constant change thereby suffocating intelligence and regulating the public with fear and confusion. While the story in the book is often considered prophetic or science fiction it was actually intent on describing London at the time of it's publication (1948) yet when reading the book, with all it's “futuristic” dystopian media, video screens and techniques of mass hypnosis, one can't help but draw comparisons to the world of today. However as a friend of mine once mentioned our current society does in fact “make 1984 look like ancient history”.

In the novel everyone is under constant surveillance by way of camera's, spies and video screens periodically blasting subliminal messages in their homes. In today's current society, year 2041, we no longer need to invade the public's life so aggressively as everyone carries around a small tracking device. These devices record the whereabouts, conversations and the information off the user enabling both a strict regiment of control and a false sense of freedom among the public. Not only do the proles willingly carry these devices but they also pay large amounts of money for them and pride the quality of the tracking unit as a signifier of status.

Asides from collection personal information, the devices have also extended the notion of “newspeak” to unimagined levels. First of all we have removed the use of vowels. This reduction allows for multiple definitions of any single abbreviation leading towards simplified thought patterns and mostimportantly the inability for generations to exchange information. Secondly unlike our predecessors we permit excessive access to sexual material and encourage the use of negative vocabularies. These inclusions have proven extremely powerful in both the art of distraction and ostracizing alternative ideologies.

As for the manipulation of information and mass media, once again we have almost reached perfection. While we continue to monopolize the mainstream news in a similar fashion as those in the novel, we have handed over a great portion of the disinformation to the public itself. Using there devices they are permitted to create there own news which has become a world wide phenomenon. They are constantly writing and re-writing there own propaganda and have even developed a fluctuating encyclopedia. Thanks to modern technologies we no longer have to employ as many workers or techniques as the general public is taking care of the disinformation at absolutely no cost. The constantly changing information is continually cancelling itself out to the extent that even the truth is considered disreputable.

READ ORWELLIAN COMICS FROM THE BEGINNING