SURREAL DOODLE "THE TECHNOLOGICAL TAKE OVER" 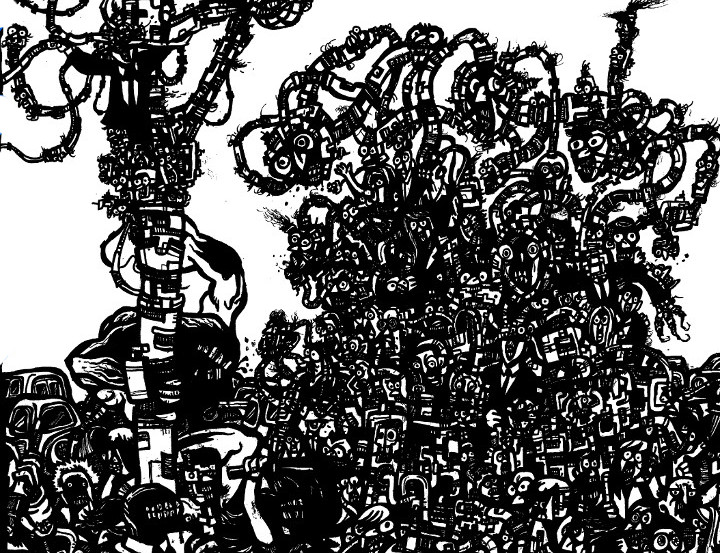 Surreal Doodle from The City of Gears! The sound of electronics rolls out over the streets. The buzzing, humming, clicking and beeping of tiny devices permeates throughout the city. Where there was once thousands of voices all mixed together in an inaudible drone, there is only vibrations as the words are now transmitted instead. Bordering on telepathy the crowds all stare into their hands as a rectangular blue luminescence is projected onto their faces. Conversations, business meetings, purchases and even fights are teleported from these devices through wires and airwaves all over the world. It doesn't take very long before the last human voice is passed.

Like this evolution of communications so to does the body begin to change. No longer in need of our mouths, eyes or appendages the technologies begin to assimilate mutating and melding into the flesh. Wires grow from man's ears and metallic instruments connect with man's mind. As the metamorphosis advances the separate entities begin to connect with each other. Information becomes homogenous, streamlined from one consciousness to the next until there is only a single thought, a solitary word, and lone sound left on every screen. In moving towards a harmonized intelligence the individual is rendered unnecessary and soon becomes obsolete.

Despite the massive assimilation some strange creatures still survive. Half human half animals roam the crowded streets untamed. However despite their instincts for survival they have little hope of competing with the newly formed societal machine. As a result these beings are abandoned as rabid creatures left to seek shelter singing songs in the parks. At the top of a light post the torso of a salary man can be seen, arms stretched out like a crucifix with wires penetrating his body at every angle. A new religion, beyond that, a new philosophy, a new existence has already take over eliminating every opposition and leaving anything outside of itself behind to die.