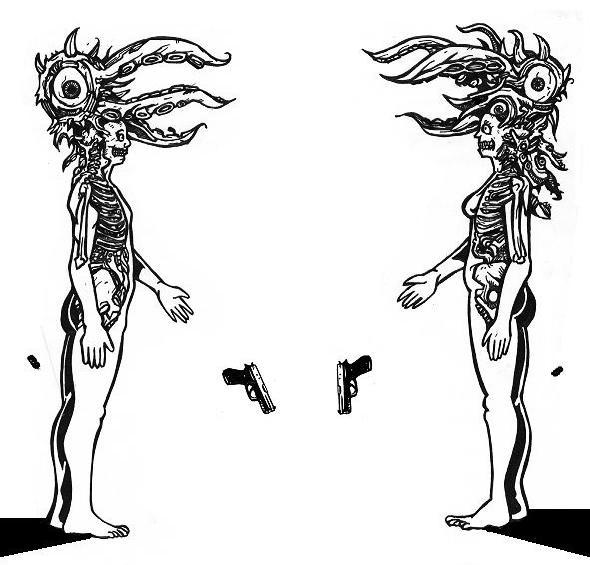 SHORT HORROR STORY... The Detective returned to the scene after the forensic investigators had completed their tasks. Except for the yellow police tape nothing else had changed. It was a gloomy apartment, or at least it had become that way, the walls seemed aged beyond their years, the lighting was weird and there air retained some strange mold-like aroma that he couldn't identify. It was the smell that perplexed him the most. It sat somewhere between rotten vegetables and rotting corpses, either way it was death. Had this been an older building or the crime had gone unnoticed for a long time there might have been some explanation but neither was the case. In fact the condos were built less than 10 years ago and he'd investigated some of the neighbouring apartments and they were all clean and well maintained. The smell couldn't even be detected in the units directly adjacent to the dreary crime scene. For such a pungent smell to be contained in this way defied the detective's logic, almost as if it came from some silly short horror story.

For the most part the incident seemed to hold little mystery. Unusual perhaps but the layout was legible and none of the officers doubted the hypothetical fate of the young couple. Two almost simultaneous gunshots had been heard the evening before. More than a dozen people made calls to either the police or the superintendent to report the noise. Most people thought it was the pipes or a possible the elevator malfunctioning but those living on the same floor had voiced greater concerns. When the police arrived and received no answer they acquired the keys from the landlord and opened the room. The first thing that hit them was the stench at which point they knew it was necessary to enter. Inside they discovered the corpses of the tenants in what can only be described as a frightening scene. Their bodies were standing upright and facing each other from either side of the room. Both of them still had the guns in their hands and both of them had suffered single gunshot wounds through the center of their foreheads. It looked like an old western gunfight between to people already dead.

The coroner was surprised but able to offer explanations as too why the bodies hadn't fallen, something to do with shock or adrenaline and there was absolutely no evidence that anyone else had entered the apartment to tamper with them postmortem. The video surveillance and security in the building was immaculate and there wasn't a trace of DNA or even a finger print to suggest the couple had even ever entertained guests. Everything pretty much checked out. The guns were also traced back to the couple who had purportedly bought two intending to keep one of them at their cottage.

After questioning their coworkers, family, friends and the neighbours it was a little bit perplexing because for all accounts and appearances they seemed like a happy couple. The Detective decided to dig a bit deeper than usual on account of the strange circumstances but came up absolutely empty. Despite there being no suspicion nor motive he figured, from experience, that there are things that only couples share. Sometimes they are little things like leaving the toilet seat up and sometimes those little things lead to divorce or domestic violence.

In the end they called it a double murder-suicide and closed the book and the apartment to move on to the next case. The Detective was ready to let this one rest but he had to go back for one last look. It wasn't the strange bodies or even the elusive motive that compelled him but instead it was the smell. The smell had his curiosity, he couldn't stop thinking about it. Where was it coming from? What was that smell. In futility he researched every inch of the condo. Between himself and the other officers this must have been done more than 20 times but he did it again anyways. Nothing. Finally he gave up a resigned to move on.

He got in his car heading for home but no matter how hard he tried he could forget that stench. He wanted to go back and pull up all the flooring and the drywall even though he knew that both had already been thoroughly searched. Then it occurred to him that maybe it was a psychic stain, like the smell of the incident, sort of like a ghost. With this abstract notion he realized that he had been working way too hard. The Detective was not a superstitious man and for the second time he felt as though the whole situation was from a silly short horror story. He couldn't help but laugh at the absurdity of these thoughts. "I'll have to tell my wife about this one" he thought as he pulled up to his house. He reached over to the passenger seat picked up the two loaded hand guns he'd brought home from work and walked towards his front door.