The village Shaman welcomed Phillip and told him of many incredible things. In particular the researcher took interest in the witch doctor’s stories about certain wondrous seeds. The seeds had frequently proved amazingly useful aiding his tribe and their lands in ways never before seen. These magic seeds, as Phillip was informed, could grow very rapidly and assume human shapes. The unusual vegetation would then adopt characteristics of the tribes-people and assist in the chores, regularly taking part in the Shaman's expeditions and the community harvest. The plant-people were kind, offering their services happily, while asking only for water and sunshine in return. The Shaman stated clearly that, though it was not truly necessary, he'd always freed the creatures in the jungle after they'd participated in three tasks.

Having doubts to the claims but assured the medicine man was not intentionally lying, Phillip offered a large sum of money for the seeds but received only joyously playful laughter from the chief. "You may take what you like, they are not mine to trade and besides no foreigner has ever visited us before. We know little of the outside world but much of it's suffering so I am happy to send our fantastic treasure abroad." Ever the business man Phillip happily agreed while sending a considerable receipt back to the office which he cashed and kept for himself.

Upon arriving at the sky-scraping castle headquarters of his business associates, Phillip entered the lobby with the air of a king. The elevator propelled him to the sixty-sixth floor where his colleagues awaited in tight suits around a traditionally enormous and elongated rectangular black marble desk. At the opening of his excited power point presentation the members of the board began to roll their dissatisfied eyes. Several mumbles in anger and jest rolled in both whispers and loudly across the open room. A comment reminiscent of Jack’s own reciprocation followed with insults regarding a magic beanstalk and gothic horror stories.

Had Phillip truly lost all of his wits under the pressures of success, travel and the hot African sun? As the chief executive reached forward to press the ominously red button, Phillip gestured grandly presenting his phone. “Fear not that I am mad for I have here in my hand the proof you desire!” He turned on the small video screen and showed his employers the brief live capture he’d gotten without the tribesmen’s knowledge. The video phone showed the strange plant beings working steadily in the fields of that remote and distant land. Though still not convinced, as computer graphics have progressed incredibly as of late, the footage stopped the security call and Phillip was permitted to continue his demonstration.

Phillip uprooted a small hibiscus decorating the west corner of the office and placed a seed inside the vacated planter. He set the pot on the marble desktop and added a bottle of water while exclaiming that what he’d found was certain to change all the world. He proclaimed that he’d seen a single plant-being gracefully handle tasks normally requiring many men and that the vegetation asked little compensation for their highly skilled and organized work. “ These plants imitate human beings but do not complain, get stressed, strike, or tire nor do they continually dream of better things!” With this the end of his speech, Phillip stepped back in awe as the vegetation arose up out of the ceramic container.

The plant had now developed multiple tendril like appendages and proceeded to nearly out grow the sizable room. It swarmed all around Phillip blocking the exit. The indescribable yet obvious face of the foliage leaned in close to Phillips own snatching the other seeds before consuming its brethren. Cornered the young businessman’s mind ran across a sentence spoken by the kindhearted Witchdoctor. “ The plants adopt the characteristics of the tribes people”. The tribes people were simple peace loving and quaint, but this monster was all devouring, seething, devious and mad. With his last breath Phillip glanced around at the remains of the boardroom and the faculty knowing all to well where the monster had learned it’s new traits. 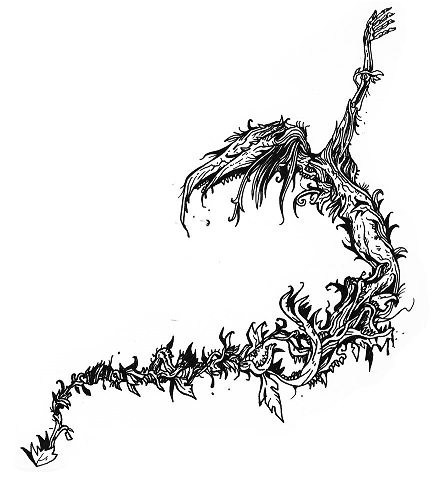