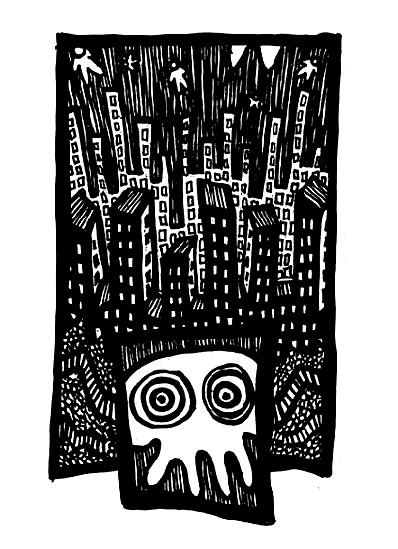 Lost amidst the city nightmares and anonymous hordes it is easy to get swept away by the metropolitan routines. Day after day spinning around in a rat race perpetually moving but never getting anywhere. As those days become months and the months turn into years it is no longer possible to distinguish the difference between floating and falling. The buildings seem to be growing and crashing simultaneously. The city is like a factory that produces only to destroy. Suddenly somewhere, somehow, the cycle is interrupted. A strange hitch in the machine moves us in a different direction. It may have lasted only a moment but the image is burnt into our brains, a giant laughing skull with swirling psychedelic eyes makes an unconscious appearance in our minds. Did anyone else see it? What does it mean? There's no need for an explanation as this joke is beyond our words so we simply join in with the laughter realizing a new sensation. Finally we recognize life as absurdity and we smile as we fall and float along with the crowds.

This first “HEY APATHY!” series was drawn between the fall of 2000 and winter of 2001. At the begin of my year long exploration I limited the works to two definite symbols, rectangular tombstone towers and circular shape anonymous crowds. Using these symbols I created the conceptual landscape likening the city to a graveyard and factory. Part of my process included making hundreds of small variations of this theme while looking for the best ideas to use in the larger artworks. I started doing these is a sketchbook but quickly moved onto nice paper as there was little difference between my rough work and the polished drawings. It was during these mini explorations that a number of addition symbols started to evolve.

Along with the nihilistic “City of Gears” crowd scenes I started to include skeletons. Often I added simple hieroglyphic cartoon style bones under the city. These could be organized like subway tracks, buried bodies or even appear to be dancing. I was interested in added both the terror of finality and a reminder of frailty through the inclusion. In the drawing on this page I gave the skull a humorous look with silly spiral eyes and crude childish proportions. In this instance I was thinking of how silly the city looks in the face of mortality. At some point we must realize that all of our stress, frustration and superficial habits are not really that important in light of a laughing skull. In many ways I looked at these as uplifting depictions using symbols of death and city nightmares to celebrate the simplicity of life.